What am I doing here? (Part II)

I was telling Steph last night how a mother at school mentioned that she liked to read my blog (hello Mel) and how relatively odd it felt that she did - I'm sure she'd be the first to admit that lack of opportunity means we don't have all that many conversations of an emotionally intimate nature.  It started me wondering what on earth blogging is about, and why specifically I am doing it.   A comment from Gypsy King on my last post about the essence of what this blog is trying to do, added further fuel to the thought flames.

I've kept it no great secret (ha) that I have suffered from depression over this past year.  I started receiving the full smorgasbord of medical help from the beginning of October, and started the blog in December.  I know that my mental health is a great deal more robust since then, and I'm not rushing back to read those first posts.

It's partly about writing, I know.  Anti-depressants, or depression itself have acted as an explosive charge on my creative brain. Just by way of illustration of my artistic failure I use that analogy like it's a good thing, and it's the opposite.  My novel, the first draft of which I finished last year, is almost untouched.  I promised my agent that I'd have a decent version to show him round about now, and I don't.  I just hope he can be patient.

I seem able to talk about my own feelings and experiences at the moment, but to hop on the wing of my creative bird is impossible.  I've lost confidence in my ability to do it. Blogging as a form of expression feels more like writing my first book, Watching Petals Fall, which I wrote about the experience of Juliette's illness and how we survived after she died.  It's honest, probably too much so, and when lovely people like Mel mention that they've read my blog I feel a tiny bit naked, just as I have done when others say they have read my book.  That makes me sounds increadibly naive because if I'm not writing to be read, then what am I writing for?

It reminds me of an older writer friend of my parents years ago who said in a rather forthright fashion when I reluctantly answered that I hadn't written anything recently I felt able to show anyone, "Why Geves, writing and then not sharing it is akin to masturbation!" I think I was about eleven at the time.  Freddie (Daniel) Green wrote books now out of print about an imagined ancestor of Billy Bunter's, and factual books about William Cobbett, and growing vegetables. I was very fond of him, despite his inappropriate sexual anaologies.  He would read my inevitably pathetic offerings and be endlessly critical, and yet he encouraged me. And I think he was probably right, about writing I mean.  It's all very well honing away, but sooner or later you stop being a writer unless anyone actually reads what you've written.

I don't know what I am at the moment however, as blogging is really the only writing I'm doing.  I think part of this episode of depression came from the fact that working on Juliette's book was a driving force for me over some critical years of grieving.  It was my touchstone, the good thing that had come out of her death. I used it I realise now, to escape feeling the full impact of her death and when I finished it, there was nowhere left to run. Valiant efforts by my agent to ignite committed interest in the publishing world having stalled for the moment, I wondered why I had written it at all.

I don't wonder any more, because I know that the reason I began it was not for anyone but my own children to read.  It was an apologia for the way I had been when their sister was ill, and the way I had acted after their sister died.  Only when I'd been writing for a while did I imagine I had anything worth saying to other readers, bereaved parents or otherwise.  It will still be there for my children, whether it's published or not.  There are stories in it that will remind us all of happy times we might otherwise have forgotten.

I've always been a confessional diary-type writer, a dubious, self-regarding art form I 'developed' from writing your actual diaries.  I do wish that I'd kept the tortured travelogue of the four love-lorn months I spent as a student in the States.  I saw and experienced many beautiful and interesting things, but mainly I eked ink over the page in description of my broken heart.  On second thoughts, maybe it's a blessing that the whole lot got binned, together with school photos and old love letters after an argument with my mother.

I have an idea for a new novel, based on my experience of losing Juliette but taking it to the nth imagined degree.  The question is, do I have the courage to write it?

The real answer as to why I'm doing this, is the little girl in the picture below.  She taught me that no matter how long you live, life is too damn short to be afraid. 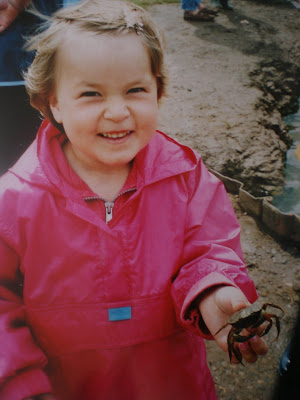 Geves Lafosse
I'm the mother of five children, and a writer. I started this blog to try and untangle all sorts of feelings after losing my beautiful five-year-old daughter, Juliette, to leukaemia in 2002. I have written a book about the experience, called Watching Petals Fall, and I'm currently working on two novels. I am represented by David Smith at Annette Green Authors' Agency.